Susanna Gregory and historical mysteries seem to go naturally together – particularly when one considers how her background links her with medieval times and crimes, and gives her such command of the periods about which she writes.

Raised in Bristol, she early on became familiar with its great medieval history, including its role in the struggle between Matilda and Stephen to succeed Henry I (the monarch in the Geoffrey Mappestone novels), the social and religious upheavals caused by the Black Death (the era in the Matthew Bartholomew novels), and its capture by first Prince Rupert and then Parliamentarian forces during the Civil Wars (action shortly preceding the exploits of Thomas Chaloner).

After graduating from university, she spent three years in Leeds, as an officer in the West Yorkshire Police, where she was exposed to numerous unpleasant practices and grisly details, which contributed to her characters and plots. Upon leaving the police, she conducted post-graduate studies at the University of Durham before earning a PhD at the University of Cambridge. Her primary post-doctoral research investigated environmental contamination in the world’s seal population by looking at the build-up of pollutants – particularly heavy metals – in the teeth and bones of different seal species. She also conducted fieldwork with whales and walruses, and spent seventeen field seasons working with marine mammals in the Arctic or Antarctic, as well as many years lecturing on Antarctic tourist ships. At the undergraduate and graduate level, she taught and supervised research in comparative anatomy and biological anthropology. She also served as an environmental consultant, including working on the Greenpeace Climate Change Database.

Susanna’s career in Cambridge – including being a Fellow and a Tutor at one of the Colleges – exposed her not only to the remarkable intellectual atmosphere of the University but to the political maneuvering, infighting, and eccentricity that abounds in such environments. These have given her a much deeper understanding of Cambridge through the ages.

Her other research passion has long been medieval history and architecture, and she has written books on the castles of Britain and cathedrals of the world, as well as producing papers about the archaeology and history of Michaelhouse, the College that is the setting for her Matthew Bartholomew series. Aside from her two popular series of historical mysteries, featuring Matthew Bartholomew and Thomas Chaloner, she was also a member of the Medieval Murderers – a group of writers who gave talks and presentations at literary festivals, and wrote ten books together.

Susanna now lives in a hamlet in southwest Wales with her husband Beau Riffenburgh, who is also a writer, and, under the pseudonym Simon Beaufort, the two have published the Geoffrey Mappestone series of medieval mysteries, the Alexander Lonsdale mysteries that take place in Victorian London, and several stand-alone thrillers. 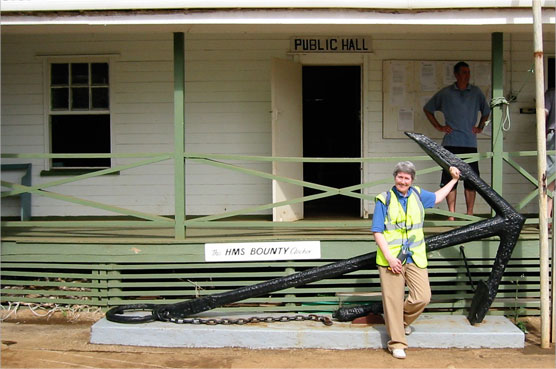 Susanna on her travels – with the anchor of the ship Bounty at the ‘city centre’ of Pitcairn Island.