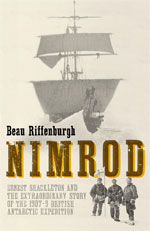 On New Year’s Day of 1908, Nimrod, a tiny over-laden former sealing ship, set out on the last stage of its journey to the Antarctic. The leader of the small expedition was Ernest Shackleton, determined to find fame and fortune by becoming the first man to reach the South Pole. On this expedition, Shackleton would record the greatest achievements of his career and make some of his most momentous decisions.

Nimrod is the definitive account of that epic adventure. While one team battled hundreds of miles to plant the Union Jack in the region of the previously unattained South Magnetic Pole, Shackleton himself led another team towards the geographic end of the Earth. Although they were plagued by hunger, terrible temperatures and winds, unseen crevasses, and the deaths of their transport animals, the four men – Shackleton, James Adams, Eric Marshall, and Frank Wild – persevered to reach a point only 97 geographical miles from the South Pole before turning back due to a lack of food. And at that point, things got even worse!

Nimrod is based on original research using first-hand accounts, and brings the entire expedition vividly to life. It was the vital prequel to Shackleton’s famed British Trans-Antarctic Expedition on which he sailed in Endurance, and was a source of enormous excitement at a time when exploration and Empire were of huge importance to national pride and identity. Featuring an extraordinary cast of characters – including Shackleton, Robert Falcon Scott, Douglas Mawson, T.W. Edgeworth David, and the great polar sage Fridtjof Nansen – this is a story of ambition, adventure, and a journey into the complete unknown.

Nimrod was published in the United States under the title Shackleton’s Forgotten Expedition, and it has appeared in translation in several languages, including German.

For the German translation, order in hardcover from Amazon.com or Amazon.de.

He saw nothing. Or virtually nothing – there, in the far distance, receding by the moment, was what several hours before had been recognisable as a ship, their ship, Nimrod. Now it was only a speck plying its way north, and he knew that to those aboard he would no longer be a solitary figure standing on a small rise silhouetted against the sky. Rather he was lost in a looming background of ice and rock; something left behind as they headed home to civilisation, safety and warmth; someone, for the time being, forgotten.

The sky was spectacular, a mixture of the indescribable pastels unique to the early morning hours of the polar regions. The lowering sun bathed the taller peaks before him in golden rays, from Horseshoe Mountain in the west, down through the Royal Society Range, to the high, remote ridges of Mount Discovery in the south. In the shadows, McMurdo Sound was a beautiful, deep blue, broken with slowly floating pieces of pure white ice, some the size of a piano, others vastly larger than the ship. Across the water, the western mountains stared down silently, rent by the tumbling, chaotic slopes of the Ferrar Glacier.

He turned around and looked at the godforsaken place below him, called Cape Royds. In a shallow dip, not far from where the shore rose sharply out of the water, was a small structure sitting near a freshwater lake. Around it, food supplies, coal, harnesses for the ponies, and a jumble of other materials were littered about randomly, like so much jetsam. Some were recognisable, most not, covered as they were by a thick rime of ice, which would take weeks to chip off. Behind the hollow were several ridges of rock, giving a modicum of protection to the tiny building sitting atop the volcanic rubble that covered the area. Beyond these, the land rose slowly, inexorably, over a distance of miles, some thirteen thousand feet up to the smoking summit of Mount Erebus.

His gaze wandered up the side of that dominating, unconquered mass, then jerked back to look down at the camp. He had thought he had heard footsteps behind him, but there was nothing there. It was not the first time he had felt that sensation, and Frank Wild, a veteran Antarctic hand, had told him about men getting panic-stricken and rushing back to base when left alone on the ice. He had already experienced the strange noises himself, and the footsteps that did not actually exist. Wild had said that when you went inland the noises stopped, but then you were even more oppressed by the intimidating silence.

An overwhelming sense of quiet would certainly not be a problem near the hut. Scattered about the rugged landscape, particularly to the west of the lake, was a rookery of hundreds of Adélie penguins. They moved to and fro constantly, squawking at each other and at the skuas, their natural enemies. They took no notice of the time or of whether their newly arrived neighbours from the north were trying to sleep. And worse than the noise was the overpowering stench.

Not that any of this seemed to bother the men at the moment. Despite the ship’s departure just hours before, only a few remained awake after a day of humping five tons of coal to the shore. A pair stood just outside the strange apparition that was their new home, with voluminous overclothes, bizarre headwear set atop faces that had not been shaved in days, and a pipe in the mouth of each. The hut was habitable, but there was a huge amount of work still to do, both inside and out. And this on the heels of what had surely been one of the most uncomfortable fortnights and some of the hardest labour that any free men had ever experienced.

It had taken weeks of seemingly endless toil to haul all of their materials off the ship, sometimes slogging for more than eighteen consecutive hours. They had been fortunate at the beginning, when they had been able to dock next to ice thick enough to pull sledges across. But then, as the natural wharf broke up, the ship had retreated to a safe distance. They were compelled to launch boats and pull heavily at the oars for more than half a mile across the ice-dotted sound before reaching a wide belt of dense, floating ice. Thence followed the nightmare of trying to navigate through the ice floes: turning their oars into poles and nudging the craft forward, simultaneously trying to keep the heavy ice from crushing them. Once the shore was reached, the stores were either hauled up by a jerry-built derrick or, more frequently, by sheer grit, determination and human muscle. The result was total exhaustion: one night Douglas Mawson fell asleep on the ship, his long legs on top of an engine, the piston moving them with its rhythmic up-and-down stroke, but he was too tired to do anything but dream about the curious motion. The same night, Leo Cotton dropped off to sleep while ascending an iron ladder, nearly falling before he was shaken awake.

Then, four days before, with the suddenness so characteristic of the Antarctic, a tempest of Shakespearean proportion had crashed into their small world. The ship had disappeared, blown clear out of the sound by gusts approaching a hundred miles an hour, leaving the men ashore uncertain as to what had happened to her. Those aboard, meanwhile, had no time to consider their stranded comrades – the temperature dropped to –16°F, and for three days the gale raged, frozen seas pounding the small vessel. The rudder-well became choked with ice, the top ropes froze into solid bars, and the deck became covered with more than a foot of freezing, sludgy water. Holes had to be broken into the bulwarks to allow the deluge to drain away.

When the storm finally blew out and Nimrod was able to return to Cape Royds, those coming ashore found the hut battered, shaken, and providing little warmth, but still standing. A second, temporary structure, constructed of bales of fodder and wooden planks and used as a cookhouse, had been blown down, killing one of the dogs. The stores – kept in containers weighing fifty to sixty pounds each – had been hurled around like paper balls, and were covered by several feet of ice, formed when the water from the sound was flung in sheets for a quarter of a mile inland.

A final day was spent unloading coal, increasing the amount on shore to eighteen tons, enough to get them through the winter – just. Against all odds – including weather, atrocious landing conditions, and human limitations – they had brought 180 tons of equipment ashore. It was an incredible amount, but, now the ship was gone, it looked as if there was almost nothing there. It certainly did not appear to be enough to keep fifteen men alive for a year.

As he left the rise and plodded down through the concrete-hard mixture of ice and scoria towards the hut, Raymond Priestley wondered what lay ahead. It was not unnatural to realise, now that their contact with the outside world had been cut, that what had seemed a great adventure was suddenly a frighteningly dangerous operation. After all, a dozen of them had never even been to the Antarctic before. It was only Wild and Ernest Joyce who had. And, of course, The Boss: the entire plan was his. There was going to be camaraderie, science, and geo- graphical exploration. Personally, Priestley was most interested in the science, but he knew The Boss was planning on going home to fame and fortune. In the next year, he would bag the South Pole for the British Empire. Then everybody would know the name Ernest Shackleton.