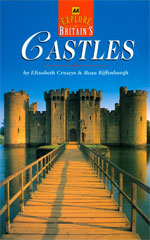 Britain’s turbulent heritage of castle-building through the ages is uniquely rich and absorbing, and has left the country with a magnificent legacy of castles. Their picturesque ruins – which can be found over the length and breadth of the land – provide important clues to the past. Built to intimidate and designed for defence, most now stand empty and many are in ruins. Yet they continue to hold their aura of power and mystery, and each has its own tale to tell. Explore Britain’s Castles takes a closer look at castles all around the country, and traces their history through the centuries, including special features on the great castle-builders. More than 115 castles are included and illustrated, from the mighty fortress of Dover to the picturesque moated ruin of Caerlaverock. Edward I’s famous castles at Caernarfon and Harlech are covered, as well as more humble landmarks such as the island tower of Castle Stalker and the legendary stones of Tintagel. 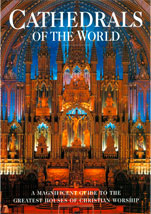 Cathedrals of the World

Although the greatest building man can design will eventually crumble and fall, that did not deter cathedral-builders, who strove to create structures of such immense height and splendour that they would point human beings to heaven itself. This is a glorious journey to more than 80 of the world’s most magnificent cathedrals, ranging from the great and famous centres of worship, such as St Peter’s Basilica in Rome and Notre Dame in Paris, to others less well-known but no less fascinating – the exciting new cathedrals of San Francisco and Manila with their adventurous architecture, or the tiny ‘Little Metropole’ in Athens, possibly the smallest cathedral in the world.

Cathedral builders have always believed that the highest purpose demands the finest skills in art and architecture, and they displayed remarkable ingenuity in devising means to support the massive weight of the soaring stonework. The superb full-colour illustrations in Cathedrals of the World convey the astonishing visual impact of this architecture and art, including the clustered pillars, the richly coloured stained glass and painted ceilings, with dramatic external views showing the cathedrals in their settings. Included are the fascinating stories of the people whose lives have been bound up with the building of the cathedrals down the ages, – perhaps the motive of ‘Earthly glory’ played a part in the making of these buildings, but the overwhelming sense is of the joy of the builders in their work, done to the best of their ability for the greater glory of God. 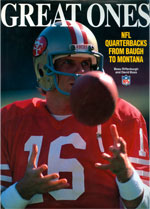 Great Ones: NFL Quarterbacks From Baugh to Montana

Professional football is, as much as any athletic endeavour, a team sport. Yet one solitary playing figure stands out – often as the hero, just as often the scapegoat. He is the quarterback. In Great Ones, the memorable men who have played NFL football’s most celebrated position are presented in classic word and photographic portraits. All of the great arms and minds from the NFL’s history are here: the ground-breaking athleticism of Sammy Baugh and Bob Waterfield, the unparalleled passing ability of Sonny Jurgensen and Dan Marino, the fiery competitiveness of Norm Van Brocklin and John Elway, the rebellious charisma of Bobby Layne and Joe Namath, and the brilliant craftsmanship of Otto Graham, Johnny Unitas, and Joe Montana. Quarterbacks of disparate eras, sizes, styles, even abilities, all are brought together in a book that includes the obscure as well as the obvious.

This is not simply the tale of individual characters, however. Quarterback controversies, the evolution of the position, college football hot beds, famous quarterback trades, and numerous other aspects of the position all receive attention. Which quarterback would you want on your side for one big game? For a season? How about one crucial drive? All the candidates are here, depicted not only in print, but in hundreds of archival photographs, all submitted for your passing fancy. 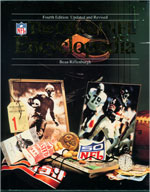 From its inception, The Official NFL Encyclopedia has been regarded as the ultimate sourcebook for information on the history of pro football. The 542-page, oversized volume has been the indispensible book for every observer, student, chronicler, and lover of pro football. In one volume it includes:

Note: All this material was later incorporated as the major part of the Encyclopedia’s successor, Total Football.