I wanted my stories about medieval Cambridge to be set in a real college. However, since I didn’t want to upset anyone, it seemed wise to use a college that no longer exists. This narrowed the choice to King’s Hall and Michaelhouse, which were amalgamated with seven hostels to form Trinity College in 1546, when Henry VIII decided to found a new college without having to pay for new buildings and land. By taking existing institutions and giving them a different name, he gained credit for a new foundation with a minimum of cost. Given that Henry held a grudge against Cambridge for producing such vocal opponents to his divorce of Catherine of Aragon as the Michaelhouse martyr John Fisher, the masters and principles of the nine foundations probably thought they were escaping lightly by simply being made part of a new royal college. 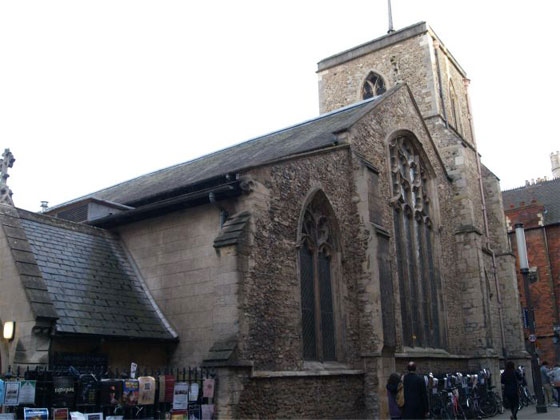 St Michael’s – formerly the collegiate church of Michaelhouse – still stands on Trinity Street, although the college itself has disappeared.

Michaelhouse and King’s Hall could not have been more different. King’s Hall was a large institution founded by Edward II as a training ground for his chancery clerks. Many of its scholars went on to become bishops, diplomats, royal chaplains, and lord chancellors. Its fellowship seldom dipped below 20 members (and was more usually 32), and household accounts suggest they lived a life of comparative comfort. By contrast, Michaelhouse was founded for relatively poor clerics and its fellowship was much smaller (usually six or seven fellows, their students and the Master).

I chose to write about Michaelhouse because it was smaller and less grand, and a shabby, somewhat impoverished college seemed a more interesting setting for a series of murders. However, before writing began there was the not-so-small matter of research. What was Michaelhouse like in the 1350s? Who were its scholars and how did they live? Where exactly was Michaelhouse located, and what sort of buildings did it have? I decided to tackle the last question first. 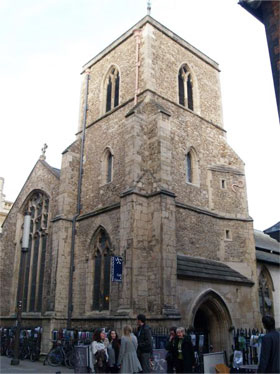 Of King’s Hall, there remain a line of gothic arches and King Edward’s gateway (built 1426–27), although this was moved from its original position in 1600. It is also commemorated in a name — one of the residential buildings is called King’s Hostel. Of Michaelhouse, however, virtually nothing remains. I went to the Local Studies section of Cambridge City Library, the University Library and to Trinity itself, which has an impressive collection of documents relating to its history. There were problems, however, because of the Peasants’ Revolt of the 1380s.

The townspeople of Cambridge didn’t like University scholars for a number of reasons – they bought up the supplies in town, they laid claim to many of the best houses, and they were subject to the more lenient canon, rather than secular, laws. So, when rioting and rebellion began in East Anglia in 1381 it seemed a good excuse for the townspeople to strike a blow at the detested scholars. They gained possession of the University Chest, where all the most important records and charters were kept, and made a bonfire of them in the Market Square. This means that far less is known about Cambridge’s early history than about the other medieval university at Oxford.

Since so many contemporary records were lost, it was necessary to look at later ones to learn what Michaelhouse looked like. One of the earliest is a drawing dating from 1574, where it is shown as a tower with a range of chambers to the west. However, by this time, Michaelhouse was part of Trinity, and work had been underway for some years to convert the muddle of small buildings into a functional whole. The architectural historians Robert Willis and John Willis Clark have concluded from this that Michaelhouse comprised a tower gateway facing south, which led to a court. On the north was a range built in the 1380s; on the west were the hall, Master’s room, conclave and library; and on the south was a range that backed onto St Michael’s Lane, probably also raised in 1380. There is nothing to suggest that there was ever an east side. Willis and Clark also project that there was a kitchen court to the north, tucked between the north wing and St Gregory’s Hostel, probably including stables and other outbuildings.

Other picture maps date from 1592 and 1688, but by the time of the latter Trinity’s Great Court and Neville’s Court were complete, virtually all traces of Michaelhouse had been eliminated, and even the great gateway of King’s Hall had been moved. 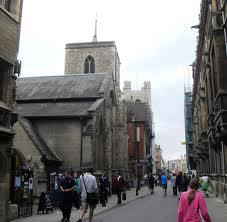 St Michael’s on a busy morning

Having exhausted written records and maps, I turned to archaeology, to discover that the only detailed survey of Michaelhouse was conducted between 1891 and 1894. This is because it stood in the southwest corner of what is now the Great Court of Trinity College, and the Master and Fellows have been understandably reluctant for archaeologists to dig it up. However, when alterations were being made to the buildings south of Trinity’s hall in the 1890s, an archaeologist called T.D. Atkinson leapt at the opportunity afforded. He discovered foundations, and, given their location, he assumed they belonged to the hall of Michaelhouse.

As if to underline the dangers of accepting too literally the details of picture-maps drawn in the sixteenth and seventeenth centuries — where accuracy may have taken second place to artistic merit — Atkinson’s findings did not sit well with the documentary evidence. The 1592 plan showed a three-storied building with no buttresses, and an oriel with a range of four other windows to the north and three to the south. Atkinson’s excavation suggested that to the north of the oriel, the buttresses were almost twice as far apart as those indicated on the 1592 plan. Using Atkinson’s diagrams, it is possible to determine a new set of dimensions for Michaelhouse’s hall. It seems it was about 23 m long, and 12 m wide. Atkinson maintained that since this would have represented a sizeable room for a mere dozen or so scholars, it must be assumed that the hall was lengthened during the 1550s when a larger hall was required. 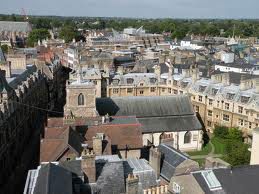 The church among the muddle of other buildings.

Besides measuring the foundations, Atkinson also discovered some fragments of the oriel window moldings. From these, it is possible to project that the transoms were arched and that they formed a delicate three-light window. In an attempt to date them, I visited the surviving arches belonging to King’s Hall to determine if there was any similarity. There was none, and it seems the King’s Hall range pre-dates the Michaelhouse fragments by at least a hundred years.

Using the archaeological evidence and the drawing in conjunction, it seems the hall was an open-plan room with a central hearth (evidence for this comes from the chimneys in the 1592 drawing). At the southern end, near the light from the oriel window, would have been the high table. Near this was the ‘conclave’, a room where the Fellows gathered to talk in the evenings — the origins of the Fellows’ common rooms today. So, I was able to conclude that Michaelhouse in the 1350s probably comprised a central hall with a couple of accommodation wings, and a few outbuildings for storage. The college land would have run down to the river, where there was probably a working pier for boat deliveries.

What about the scholars who lived in this complex? The few deeds that have survived are in Trinity’s muniments room, some in the remarkable Otryngham Book. (Otryngham was an enthusiastic master in the fifteenth century who took all Michaelhouse’s old records and bound them together — an act for which historians will always be grateful.) Most of the documents are brief, and many use a form of shorthand that is often difficult to decipher, so interpreting them is frequently a matter of guesswork. Unfortunately, none of the household accounts have survived. 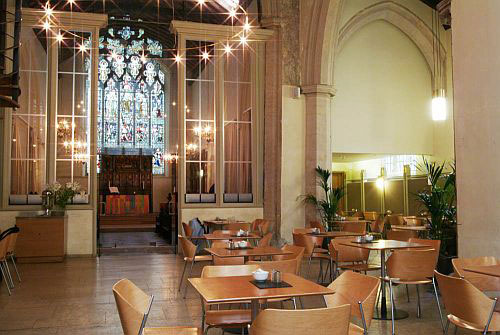 In recent years, the church has been turned into Michaelhouse, a café, community centre and art gallery.

The Otryngham Book indicates that several scholars were active in purchasing more property for Michaelhouse in 1353. These included Ralph Langelee, Thomas Sutton, Michael de Cawston, and John Clippesby. One of the founding members of the college was named Thomas Kenyngham. These have all become characters in the Bartholomew series, although I feel an occasional twinge of guilt for making them eccentric, when they were probably perfectly sober, law-abiding men. My consolation lies in the fact that men dead 600 years are not in a position to argue.

No one at Michaelhouse in the 1350s described what it was like to live there, so it was necessary to look at accounts of college life in Oxford and contemporary chronicles from other regions of Britain. We know there would have been a strict daily routine, based on reciting specific religious offices and attending lectures at pre-determined times. Food was probably much like that eaten in other households, with a staple of bread, beans and peas, and a few seasonal vegetables from the garden. Meat may well have been purchased from the stalls in Butcher’s Row, just over the road from the college. Fuel for cooking and heat was expensive, so they would have been more used to cold, damp rooms, continually wet clothes and cold feet than we are today.

Such research is never complete, and investigations into other aspects of Cambridge’s history means that I constantly uncover little snippets of information about Michaelhouse that can be added to the picture. It can be frustrating — especially when I think of all the information that was lost during the Peasants’ Revolt — but it is also highly rewarding. I recommend a foray into Cambridge’s dim and dusty history to anyone fortunate enough to visit our charming city.