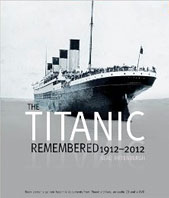 On 10 April 1912, Titanic began her first and final voyage. For more than 1500 people this would be the last time they would ever see land. Published to coincide with this centenary, Titanic Remembered tells the complete history of this magnificent ship, from its conception as the most luxurious vessel in seafaring history, to the tragedy of its sinking and its enduring legacy. Included throughout are extracts from first-hand accounts of those who designed, built, and sailed on Titanic, as well as those who lost their lives when she sank. This luxury commemorative edition comes in a presentation case with a DVD featuring footage of this unsinkable ship and authentic accounts from Titanic survivors as well as 40 beautifully reproduced facsimiles of Titanic memorabilia, including: