Beau Riffenburgh is an imperial historian who specialises in the history of exploration, particularly that of the Antarctic, Arctic, and Africa.

Born in Pasadena, California, he grew up in the vibrant and diverse cultural atmosphere of the city that is home to the annual Tournament of Roses parade and the Rose Bowl football game as well as to the California Institute of Technology, NASA’s Jet Propulsion Laboratory, the Pasadena Playhouse arts venue, and the Norton Simon Museum of Art.

After earning a first degree in psychology and a Master’s in journalism, he entered the world of professional sports, working in public relations for the Los Angeles Lakers basketball team before joining NFL Properties, the marketing, licensing, and publishing branch of the National Football League. He spent eight years as NFLP’s senior writer and historian – and later served as editor-in-chief for Total Sports Publishing – writing or contributing to more than 15 books about sports. 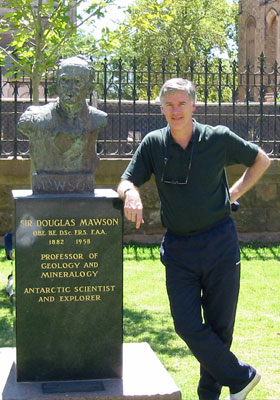 Beau Riffenburgh next to a bust of Sir Douglas Mawson in Adelaide, South Australia.

In the late 1980s, Beau moved to England, where he earned a PhD at the University of Cambridge’s Scott Polar Research Institute (SPRI). He served for 15 years as the Editor of Polar Record, the world’s oldest journal of polar research, and as head of SPRI’s Polar History Group, while also lecturing in the University’s History Faculty. He now lives in southwest Wales with his wife, Liz Cruwys (Susanna Gregory).

Although he has written about the exploration of virtually every part of the globe, most of Beau’s recent research and publishing has specialised in polar exploration, including writing several critically acclaimed books. He was also editor of the award-winning, multi-volume Encyclopedia of the Antarctic. In conjunction with Liz, he has written numerous non-fiction works, plus 13 mystery novels under their pseudonym, Simon Beaufort. The most recent of these is Watchers of the Dead.

He currently has two books in press: the edited and annotated diary of Antarctic explorer Archibald Lang McLean and, written with Angie Butler, Shackleton’s Critic, a biography of Eric Stewart Marshall, the chief surgeon on Ernest Shackleton’s Nimrod Expedition.

Beau’s books – which have been translated into 14 languages – include the following. Click on the title for more details.

The Myth of the Explorer

A critically acclaimed study of how the British and American popular press created and perpetuated the image of explorers, establishing them as key international figures in the late-nineteenth and early-twentieth centuries.

The thrilling tale of Ernest Shackleton’s first Antarctic expedition, on which he penetrated to the centre of the unknown Antarctic continent and then made a remarkable race against time to get back alive.

An insightful look at the career and expeditions of Sir Douglas Mawson, usually considered the greatest scientist–explorer of the ‘Heroic Age of Antarctic exploration.’

Encyclopedia of the Antarctic

An international-award-winning, multi-volume source that is perhaps the most authoritative and comprehensive Antarctic reference work ever published.

The most in-depth study ever of Douglas Mawson’s remarkable Australasian Antarctic Expedition, including his solo journey that Sir Edmund Hillary described as ‘the greatest survival story in the history of exploration.’

Brief, but richly illustrated, accounts of the career of Roald Amundsen, the expeditions of Douglas Mawson, and Robert Falcon Scott’s Terra Nova expedition.

Filled with names that have made, and changed, the course of history, Exploration Experience takes one on a voyage of discovery.

The Titanic Experience: the Legend of the Unsinkable Ship

This book provides a unique and compelling insight into Titanic by charting her life from the initial concept and the excitement of the first voyage to the dramatic collision and sinking, culminating with recent investigations and salvage missions.

On 10 April 1912, Titanic began her first and final voyage. For more than 1500 people this would be the last time they would ever see land. Published to coincide with this centenary, Titanic Remembered tells the complete history of this magnificent ship, from its conception as the most luxurious vessel in seafaring history, to the tragedy of its sinking and its enduring legacy.

The Men Who Mapped the World

From sticks and stones to satellite technology, cartography has travelled almost as far as man has in order to develop the maps we know and use today. The Men Who Mapped the World tells the story of the philosophers, travellers, artists, and scientists who brought together their skills and knowledge to produce some of the most intriguing documents in our history.

Books on travel and sports.

The first-ever biography of James McParland, the legendary Pinkerton’s detective who took down the Molly Maguires, organized the hunt for Butch Cassidy and the Wild Bunch, and masterminded the investigation into the leaders of the Western Federation of Miners for the assassination of the former Governor of Idaho.

Mertz & I … : The Antarctic Diary of Belgrave Edward Sutton Ninnis

This diary is the story of a young lieutenant in the Royal Fusiliers – B.E.S. Ninnis – and his determined and ultimately successful attempt to become a polar explorer. It is the tale of how, under the influence of Swiss ski champion Xavier Mertz, he became a key figure in Douglas Mawson’s Australasian Antarctic Expedition, and how, tragically, he met an untimely death, leading to Mawson’s famous solo journey to survive.