Encyclopedia of the Antarctic 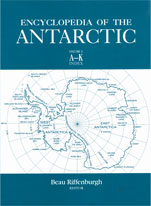 The Antarctic is unique – geographically, politically, and scientifically. It is the most remote, hostile, and dangerous continent, while at the same time the most pristine. Antarctica is the only one of the Earth’s landmasses not directly governed by individual nations, but under the control of a carefully developed Treaty. It is the only place in which claims of ownership have been set aside, nuclear testing banned, damage to the environment contained under specific regulations, and international competition replaced by scientific investigations that link nations in peaceful efforts. Those investigations have led to some of the most important scientific discoveries of recent decades, including the seasonal depletion of ozone and the understanding of global climate change. However, the Antarctic is a place of great interest not only to researchers, but to the public, as shown by the growth of tourism, the many educational programmers about it, and the recent public fascination with Ernest Shackleton, Robert Falcon Scott, Douglas Mawson, and other explorers.

The Encyclopedia of the Antarctic contains 495 entries on a wide variety of factors, issues, and individuals influencing and relating to the Antarctic. Coverage includes well-established topics, but also areas of recent research or current concern such as political, legal, environmental, tourism, technological, and philosophical issues. Entries range from factual, data-driven topics such as biographies, wildlife details, and statements about national Antarctic programs, to longer, thematic overviews on major themes, to analytical discussions of issues that are of significant interest both to researchers and the general public, such as climate change, conservation, geopolitics, biogeography, and pollution.

Composed by over 311 international scholars and experts, this award-winning multidisciplinary two-volume set is an essential resource for information on the Antarctic.