In an age when sugar was expensive and when most people rarely even set eyes on it, let alone ate any, sweet cakes and pastries such as Lombard slices were considered a fabulous treat. There are a number of variations on this recipe in fourteenth- and fifteenth-century manuscripts, but they all boil down to a sticky, sweet flap-jack-like cake with preserved fruit and spiced with cinnamon, ginger and perhaps nutmeg. Of course, spices were expensive, too, so it is small wonder that Brother Michael had a taste for something like Lombard slices.

The recipe referred to in the Bartholomew series had an extra stage of cooking at the end. When they were set, they would be deep-fried in lard (prosaically called ‘grease’ in the original manuscripts) so that they were served hot and oily. However, they are much nicer served cold and without the added cholesterol boost. 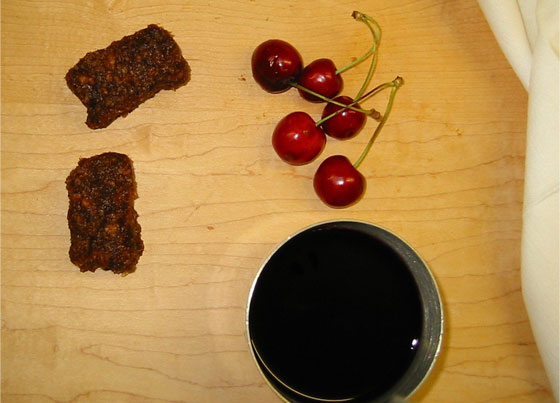 400 g (14 oz) chopped and pitted dates
200 ml (a bit more than a third of a pint) white wine
40 g (1.5 oz) sugar (or honey, if you prefer)
Quarter teaspoon ground ginger*
Quarter teaspoon cinnamon*
Pinch of nutmeg*
Roughly 90 g (3 oz) soft breadcrumbs (not wholemeal, but white or brown will do)

* You can alter the quantities of spices, adding more ginger if you prefer. The medieval recipes are very vague about quantities, and it really boils down to personal taste.

1. Put the chopped dates in a pan with the wine and sugar, and heat gently until the dates are soft. Beat them into an almost-smooth puree (you can do this in a food processor, if you want).

2. Add the spices and enough breadcrumbs to make the mixture about as thick as marzipan.

3. Form into an oblong roll. You may want to put it in the fridge to chill at this point, if cutting proves difficult.

4. Cut into slices – not too big, because they are quite sweet. You can sprinkle the finished result with a little sugar mixed with the spices, if you like, or you can roll them in icing sugar if they are too sticky.

The variations on the recipe sometimes use almonds or quinces instead of dates. One version used almond milk instead of wine, although the cooking instructions were so vague that I ended up with a sweet paste.

One of the better alternatives is the following: 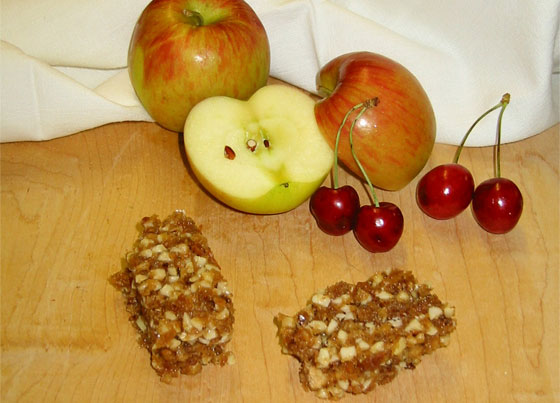 * Add to taste, as above.
** This topping is in the original recipe, but you may well find the cakes sweet enough without the addition of more sugar.

1. Add the cinnamon, ginger and nutmeg to the honey, and simmer gently in a pan for about 10 minutes.

2. Stir in the almonds and about three-quarters of the breadcrumbs. Cook for another few minutes until the mixture sticks together. You may have to add more honey (or even some butter) at this stage. You should end up with something fairly stiff that can be moulded into shape.

3. Put on to waxed paper and allow to cool. You can cut larger slices of these, since they are not quite as sweet as the date version.

4. Sprinkle the sugar and ginger mixture over the top, if you are using it.

Peas and beans were an important staple food in medieval times, especially in poorer households – although records suggest that this humble fare also appeared on the tables of richer folk on a fairly regular basis. Fourteenth- and fifteenth-century recipe collections contain suggestions of things to do to spice up the boring old pea pottage with other vegetables (charmingly called ‘wortys’) and flavourings, indicating that peas and beans were important right across the social ranks.

Michaelhouse would have made good use of such a cheap food supply, and would have had ample supplies of dried peas and beans in its storerooms. Some sort of pulse-based soup would have been on the menu on most ‘lenten’ days (that is, days when meat was forbidden). Again, variations occurred when seasonally available produce would have been included in the pottage – vegetables like cabbages, parsnips, carrots and other vegetables grown in the College gardens would have been added when and where available.

The version here comes out like pea puree, and is quite nice served with fish.

25 g (1 oz) breadcrumbs
1 egg yolk
275 ml (half a pint) milk
350 g (12 oz) dried peas, already soaked and cooked*
Teaspoon parsley (more if using fresh)
Half a teaspoon of ground ginger
Pinch saffron (or turmeric, if you do not have any saffron)
Salt

* You can use frozen peas, if you prefer, but you will need more of them. If you choose to use canned peas, then you will need a tin that has 525 g (19 oz) peas in it.

1. Mix breadcrumbs, egg yolk, saffron, salt, ginger and parsley. Bring the milk to just under a boil, then add the rest of the ingredients.

2. Bring to a boil over a low heat, stirring continuously.

3. You can add more milk (or water) if you want to use it as a soup), or reduce it to a puree (in a food processor or by patient hand mashing) as a vegetable accompaniment to fish.