The Men Who Mapped the World 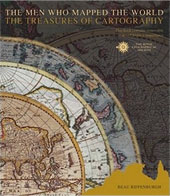 From sticks and stones to satellite technology, cartography has travelled almost as far as man has in order to develop the maps we know and use today. The Men Who Mapped the World tells the story of the philosophers, travellers, artists, and scientists who brought together their skills and knowledge to produce some of the most intriguing documents in our history. Lavishly illustrated with charts and plans compiled from the information brought back from expeditions led by such notable figures as Sebastian Cabot, James Cook, Lewis and Clark, and David Livingstone, the book not only tells stories of some of the unsung heroes of exploration history but also examines how we have moved from Prehistoric hidden maps in cave paintings to NASA Landsat maps in the twenty-first century. With stunning examples of early Roman stone maps, the stylised formations of medieval charts, hand-coloured scientific projections of the eighteenth century, and the fine detail of Ordnance Survey maps in the nineteenth, it is possible to see how maps have played a part in everything from claiming new territories to winning wars and establishing transport and communication networks. Included are more than 300 illustrations and 15 removable facsimile maps of historic importance.