Carmarthen in the 1190s: a Snapshot in Time 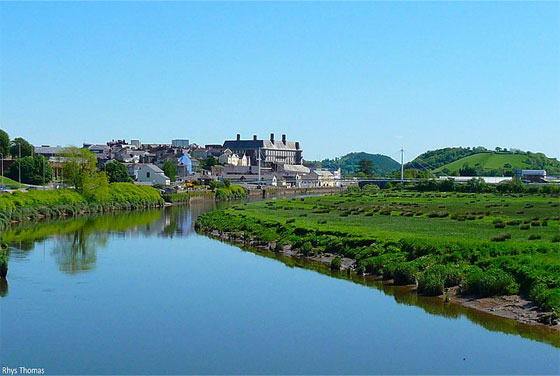 Carmarthen from the River Towy

Writers are always being told to keep to what they know, so I decided to set some of my Medieval Murderers novellas in Carmarthen, the nearest town to where I live – a much-loved place, and one with plenty of history and interest. However, modern Carmarthen with its shops, cars and bustle is very different to how it would have been in the late twelfth century, the time I chose for the stories, so I had to go about finding out what it was like.

The first stage was just to wander – something I did (and still do) for the Bartholomew novels set in Cambridge – and explore the layout of the streets and note the hills, dips and flat bits. The town has a lot of small lanes, and local historians have told me that they date back to medieval times. There would have been a lot more of them – narrow, atmospheric places that would have been full of small shops and houses, and jammed with carts and people.

The second stage was to look at what buildings survive. The most obvious is the castle. It was once a large fortress, one of the most important in south Wales. It was the administrative centre of a huge area, and survived until the civil wars, after which it was slighted by Cromwell and ‘quite demolished’. 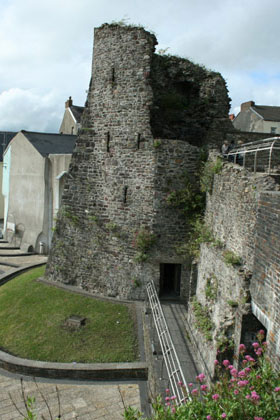 The remains of Carmarthen castle

Even in the 1190s, when it would have been fairly rudimentary, it would have dominated the town, which was one reason why it was there. The Normans had arrived at the end of the eleventh century, and wanted the locals to know who was boss. It was a symbol of their mastery and control. The security of a castle encouraged merchants and artisans to live there, and a settlement began to develop around it, called New Carmarthen.

Parts of the castle survive, although they are dwarfed by modern buildings, particularly the council offices. However, most remains are later than the twelfth century, so I had to turn to archaeological reports to know what the place was like in the 1190s. They provided me with an excellent picture. The castle would have been far simpler than the elaborate complex that developed later. It would have had a motte with a tower on top, and two baileys. Wooden palisades were all around it, and many of its buildings – barracks for the troops, kitchens, stables, storerooms etc – were probably wood, too. It stood on the plateau overlooking the River Towy, guarding the bridge.

The third stage was to see what historical records could tell. There is one that shows that Henry II spent the then vast sum of £170 on the castle, which suggests that some parts may have been built in stone. The notion of replacing wooden walls with stone ones is a feature that plays a role in several of my Medieval Murderer stories. Another document records a serious raid in 1215, which was supposed to have all but destroyed the fortress; this has been interpreted as meaning that it was still mostly wood.

The castle was not the only building of importance. There was also the parish church, St Peter’s. Today, its iconic white tower still watches over the town. It is a fabulous building, with a wide nave and spacious aisles, capable of holding hundreds of people. No one knows exactly when it was founded – it may have been pre-Norman – but mention of it appears in a record dating to the early twelfth century. This shows King Henry I giving it to Battle Abbey – the place built by William the Conqueror (his father) to commemorate the battle that won him the English throne. That meant tithes from Carmarthen would have been ferried back to Battle Abbey, which would have had the right to appoint a vicar for a pittance and keep most of the money for itself. This was a common practice at the time. However, by 1180, these rights had been transferred back to Carmarthen, and were owned by the nearby Augustinian Priory.

Like the castle, St Peter’s would not have been grand in the 1190s. It would probably have been built of stone, and would have been small, dark and intimate, like many Norman churches.

The Priory of St John and St Teulyddog was also ancient. Excavations suggest there was a religious community here by the eighth century and perhaps even earlier. It belonged to the Augustinians in the 1190s, and later became one of the richest foundations in Wales. It was in the area known as Old Carmarthen, in the area first settled by the Romans, whose walls and ditches would still have formed a major feature in the 1100s. Unfortunately, records do not tell us the name of the prior in the 1190s.

There was a second religious foundation in the town, too, but this belonged to the Franciscans, who did not arrive in the country before 1215. The Greyfriars could thus play no part in any tale set in the 1190s. 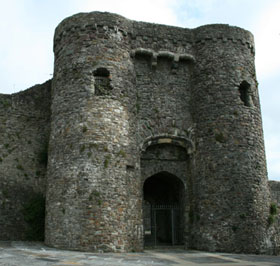 The castle, priory and church were the main buildings of note in 1190s Carmarthen. Houses would have been between them, ranged along the roads. Another important feature was the bridge. The River Towy played a vital role in Carmarthen’s development. It provided a link to the sea, and boats and ships brought goods to the town for sale in the market. Then, as now, it served a huge hinterland. The Romans raised a bridge over it, and there would have been one in the 1190s, although it is difficult to say whether it would have been destroyed or damaged during the various raids that ravaged the town in the late twelfth century. The river is shallow and fairly sluggish, so doubtless ferries would operate when the bridge was unavailable. The tolls collected from people using the bridges or the boats would have added to Carmarthen’s wealth, as well as attracting business to the town.

So what was happening in Carmarthen in the 1190s? A deed dating to 1194–1198 lists its constable as Symon Cole. It was attacked by Lord Rhys of Deheubarth in 1196, records suggesting he sacked the town and caused a considerable uproar. He died the following year, at which point his realm began to fragment under his warring sons. The town would have been recovering from the attacks in the late 1190s, as well as keeping a weather eye on which of Rhys’s sons currently had the upper hand.

Records from the time give the name of a few of Carmarthen’s more prestigious residents – they were often witnesses to property deeds. Among them are William Kyng and Richard Spilmon (and I found it interesting that two streets in Old Carmarthen are called King Street and Spilman Street). Others include the clerks, chaplains and servants who worked at the castle.

But as with all historical research, the more you learn the more you realise there is to know. My investigations into 1190s Carmarthen are still ongoing, and will continue for the foreseeable future.