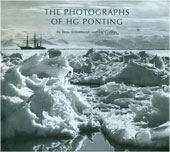 The Photographs of H.G. Ponting

Herbert Ponting was one of the greatest camera artists of the early twentieth century. He is best known for his work in the Antarctic, where he portrayed in vivid detail the lives of the men who went south with Captain Scott. But Ponting was also a world traveller, and he produced classic photographs of the American West and the Russo-Japanese War. His particularly exquisite studies from Japan, China, and India allow a tantalising glimpse of cultures long since changed. This book is comprehensively illustrated and offers a fascinating account of the life and work of this incomparable artist.

With Scott to the Pole

The triumph and tragedy of Robert Falcon Scott’s Terra Nova Expedition of 1910–13 make a majestic and revealing tale of the British Empire in the early twentieth century that today continues to touch the hearts and stir the imaginations of those who hear the story. With Scott to the Pole celebrates the achievements of Captain Scott and all the members of his expedition, not only carefully detailing the story, but showing it in the photographs taken by Herbert Ponting. The camera artist’s meticulously executed and perfectly composed images capture the sublime landscape of Antarctica as well as the bravery and endurance exhibited by those on the exhibition. Ponting’s photographs include exceptionally finely crafted images of the rough sea journey, Terra Nova’s breaking through the pack ice, the setting up of the base camp and building of the hut at Cape Evans, exploratory scientific trips, day-to-day life at camp, the laying of the depots, and the final push to the Pole. It is a fitting tribute not only to Ponting’s monumental aesthetic vision, but also to a magnificent story of heroism at the extremes of survival.