The Titanic Experience: the Legend of the Unsinkable Ship 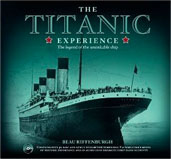 Hailed as ‘unsinkable’ and the ultimate in luxury, within five days of beginning her maiden voyage, Titanic had sunk to the bottom of the Atlantic Ocean with the loss of more than 1500 lives. A century on, the fate of the tragic ship remains the worst disaster in seafaring history and still horrifies and enthrals. This book provides a unique and compelling insight into Titanic by charting her life from the initial concept and the excitement of the first voyage to the dramatic collision and sinking, culminating with recent investigations and salvage missions. Complete with more than 200 photographs and two stunning gatefolds, which take the reader from the glamorous ballrooms and restaurant down to the submerged grandeur of the wreck, this book is accompanied by a CD containing evocative first-hand accounts from survivors and readings performed by actors, and is the first work to contain 30 facsimile items of Titanic memorabilia, including: