The Myth of the Explorer 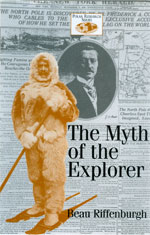 Explorers such as David Livingstone, Fridtjof Nansen, Henry Morton Stanley, Robert E. Peary, and Robert Falcon Scott are heroic figures whose reputations and achievements have assumed almost mythical proportions. Having penetrated to the ends of the Earth or the least-known areas of the ‘Dark Continent,’ they conjure up images of heroism, self-sacrifice, patriotism, and fortitude. In reality, however, many exploratory expeditions were tainted by deception, greed, incompetence, ignorance, and failure. How is it, then, that the heroic myths were created and perpetuated?

Concentrating on exploration between 1855 and 1910, The Myth of the Explorer examines how the sensation-hungry Anglo-American press created the popular culture of the explorer – including the public’s insatiable appetite for ‘derring-do’ – and how the press (or its owners or editors) subsequently turned its chosen few into icons representing the greatest images of science, nationalism, and imperialism.

Through this process, the subterfuge, shabby actions, and genuine bravery behind such events as the solution of the mysteries surrounding the sources of the Nile, the search for the survivors of the Jeannette disaster, and the struggle between Peary and Frederick Cook in claiming the first attainment of the North Pole are elucidated.

Based on extensive original research, the book reassesses many explorers’ reputations and makes intriguing links between popular culture, the growth of science, imperialism and the role of the press. At the same time, through the lens of exploration, it examines the expansion of newspapers and the manner in which they developed.

For one scholar’s view of the significance of The Myth of the Explorer click here.